A Vital Guide to: Shipping to Alaska

Alaska is a State that has many unique attributes. For that reason shipping to Alaska has its own set of challenges. Alaska is the largest state in America with over 660,000 square miles of land. However, much of it is uninhabited as it has a total population of just over 730,000 people. On top of this it is over 2200 miles away from the nearest major US City (Tacoma, Washington) by road. From a logistics perspective this creates a unique dynamic. If you are shipping to or from Alaska you will find that carrier options, shipping schedules, and other logistic resources are more limited than destinations with higher populations and closer to the US mainland. In this article we discuss how to best manage your shipments to or from Alaska and some important considerations.. [fl_builder_insert_layout slug=”Sidebar-Buttons”]

MODES OF TRANSPORT TO ALASKA:

Like most destinations around the world the primary modes of transportation to Alaska are via land, air, and ocean services. However, there are some differences in each mode compared to other destinations.

Trucking to Alaska comes with some limitations. For one, there are fewer carriers that will travel to Alaska. Many common carriers prefer to stay within the contiguous 48 States of the US. Others simply do not cover such great distances. Another consideration is some carriers do not deal with cross border traffic. Even though Alaska is part of the United States, you must cross through the Canadian border. This is not a problem with the proper documentation, but some carriers simply are not set up or willing to deal with border crossings.A limited amount of carriers and the greater difficulty of transporting goods by land to Alaska means freight is typically more expensive per mile. Carrier availability will also be more limited. Careful consideration should be given to your budget and advanced planning will be necessary to make sure things move as scheduled.

Transit time by land/truck from Seattle to Alaska will take approximately 2-3 days. You must account for additional time from your cargo origin to wherever your trucker will cross the Canadian border.

Most ocean cargo going to Alaska is by means on smaller vessels or barges. The major ports from the US Mainland to Alaska is the Port of Tacoma. Transit time is usually about 2-3 days by ocean vessel. Vessel schedules are typically 2-3 times a week on specific days.

“More than 80 percent of the vans and containers shipped into Southcentral Alaska in two ships each per week that generally arrive in Anchorage on Sundays and Tuesdays. – Source Port of Alaska

This means careful consideration should be given to ensure your cargo arrives at the correct port cut off day to make the right schedule. There can be one or two days between sailings which would add additional time to transit if cargo missed a vessel cut off date.

Imported cargo moves across Anchorage docks to final destinations in homes and businesses of 85 percent of all Alaskans.” – Source Port of Anchorage. 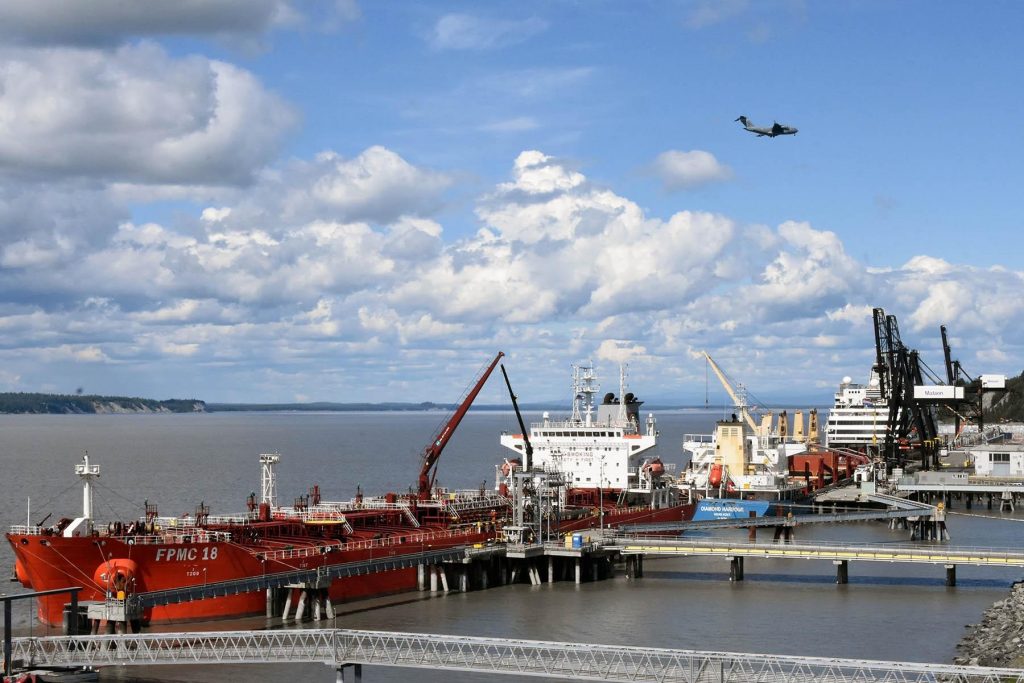 “The Port of Alaska is an intermodal shipping and transportation hub that connects marine, road, rail, air and pipeline transportation systems that move goods from sources to end users – Source Port of Anchorage.

So although it may be smaller and more distant than other US Ports, Alaska is ready for all types of cargo!
Other Alaska ports of call include Kodiak and Dutch Harbor. However, Dutch harbor has a less frequent schedule, so if your cargo goes to a less major port, be sure to check the sailing schedule.

It has been mentioned that due to the limitation of carriers pricing is usually more expensive to ship to Alaska. You will also find for LCL (less than container load) ocean shipments from the US ocean freight is charged by Cubic Feet as opposed to cubic meters.

Alaskan ports will have their own unique port charges for port related operations. These charges must be pre-paid. It is good to work with a trusted forwarder that has an established account with the port.

As per Anchorage port:

Our experience has shown that other destination charges once your cargo arrives at Alaska are comparable to other Mainland US destinations. That being said, if your cargo is restricted, out-of-gauge, requires special handling, or has other unique properties check with your trusted logistics partner to get an exact estimate of handling fees. Each port and CFS (Container Freight Station) has its own set of handling fees.

Similar to other modes of transportation, air carrier selection is more restricted to Alaska. Routing is also more restricted as few US Airports have direct flights into the major airport: Fairbanks and Anchorage Airport. Seattle, Denver, and Chicago are few examples of major airports that have direct flights. But even a high traffic airport like Los Angeles (LAX) connects in Seattle to go to Alaska. This means you should account for additional time if your cargo is travelling by air to Alaska. Air transit time, however, is usually kept around 1-2 days with proper planning. Also, direct flights into Alaska are not as common. With the exception of some Chinese airports, shipments going into Alaska from other countries typically will connect at a major hub.

Our experience has shown Fairbanks to be a frequent final destination for air cargo into and out of Alaska.
Fairbanks is considered an inland terminal and is approximately 500 miles away from the nearest oceanside port.

WHAT GETS SHIPPED TO ALASKA?

The top import into Alaska is Petroleum followed by machinery.

WHAT DOES ALASKA SHIP?

Alaska has a lot of natural resources. It’s number one exoprt is Zinc, Ores, and Concentrates. Followed by Frozen Fish Meat.

While it may be a unique location to ship to, Alaska has a dynamic import and export economy both with the Mainland US and Globally. Shipping to Alaska comes with a unique set of considerations, but careful planning can ensure your shipments “North to the Future” (Alaska State Slogan) are done efficiently.
Our team at Vital Worldwide has had extensive experience shipping all types of commodities to Alaska and are ready to answer your questions! We look forward to hearing from you!